Memorial Day Weekend is a fun time for many families. The weather is beginning to feel like summer, people began breaking out the BBQ and even opening the pool. While we hope you enjoy your Memorial Day weekend festivities, Little Shelter would like to offer some tips on how to keep your furry loved ones safe this weekend.


From all of us at Little Shelter, we hope you have a happy and safe Memorial Day!
Posted by Little Shelter Animal Rescue & Adoption Center at 10:15 AM No comments:

She Can't Smile Without You... Help Mia Today

After being returned to the shelter, Mia's troubles were far from over. A serious mouth infection is causing her pain. With your help Mia can get the surgery she needs to smile again.

Mia is a beautiful white and grey fluffy cat around 6 years old. She's very soft and will mew for attention when you call her name. Sadly, after being adopted as a kitten she was recently returned to Little Shelter loosing the only family she has ever known. Poor Mia's troubles didn't end there, as her mouth has been causing her great discomfort.

Mia had always been a happy cat, but when she started acting out of character: swatting, hissing, avoiding affection; her concerned family took her to the vet. The vet revealed that her gums were infected and that she needed to have many of her teeth removed, a surgery her family could not afford. With finances tight and a new baby on the way, the family was running out of options.

Little Shelter is committed to the care of their cats and we did not hesitate to take Mia back in when the family contacted us. We would never leave this poor girl behind, especially when she was down on her luck. After a visit with our own vet to confirm the diagnoses, Mia is scheduled for surgery to remove her bad teeth and alleviate her pain. Little Shelter is currently asking for donations to help cover the $1,500 cost to help Mia smile again. She is expected to recover and be available for adoption shortly afterwards. 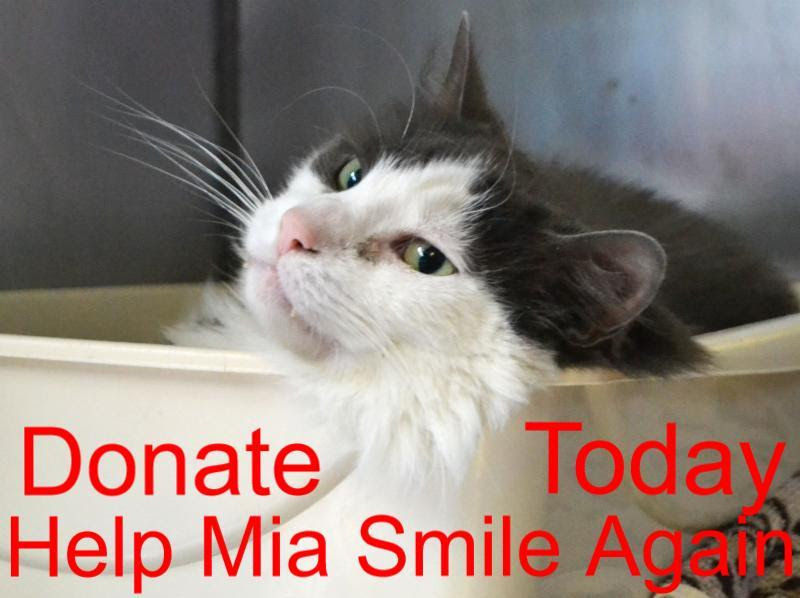 You can help Mia smile again by donating today! Click Here To Donate
Posted by Little Shelter Animal Rescue & Adoption Center at 9:30 AM No comments:

Stories With Happy Endings Are The Best...

Some of you might remember the campaign we did back in February to help find Tigger a loving home. He arrived to Little Shelter with his two brothers when his owner passed away and there was no one to care for them. They had been adopted out as kittens many years ago and meant everything to their owner.

When they first arrived back at Little Shelter, the two brothers were very scared. Tigger would sit with them, purring and comforting them. He truly was their little hero as he assured his brothers everything was going to be okay. Within a few days the other two came out of hiding and following Tigger's lead, they all proved to be very friendly, cuddly cats.

We are happy to announce that in April, Tigger found his forever home and hero! Kurt and his mother came into Little Shelter looking for an adult kitty to adopt. When they met Tigger it was love at first sight and it was obvious Tigger felt the same. When they heard Tigger's story they knew that he had to be the one.

Shortly after being put in our free roaming cattery, one of the brothers was adopted and the other adjusted to life at Little Shelter. Now Tigger was able to grieve for the loss of his owner and everything he had ever known. Sadly he began to loose weight because he refused to eat. We began to campaign his story in hopes we may find him a loving home, he needed a hero of his own to save him.


Since he went home, Tigger has not left Kurt's side and the two have become the best of friends. Tigger will sit and listen to Kurt play guitar, snuggle with him every night in the bed and is always ready for cuddles. Tigger also has a kitty sibling in his new home that he has become very attached too. We could not be happier for Tigger, Kurt and the whole family!

On April 29th, Little Shelter held our annual Volunteer Appreciation Day. This special day is dedicated to those who have put in so much of themselves into the shelter. There is always someone to help take cats and dogs to an event or to the vet, to walk and socialize, from helping with repairs around the shelter to helping at events. Our volunteers go above and beyond for the well being of the animals and the big things that happen here would not be possible without them.


This year Little Shelter Volunteers were presented with special t-shirts that have the 90 years logo and enjoyed an afternoon buffet. For volunteers who have been with Little Shelter 15+ years, a dedication brick was made in their name for our new "walk of fame" to be unveiled this summer. Thank you to all our Volunteers for everything you do for the shelter and for the animals.

A transport of 30 dogs at risk for euthanasia were taken from multiple high-kill shelters in Texas and arrived to safety at Little Shelter on Sunday May, 7th. The dogs were transported in a vehicle caravan across states through Little Shelter's Passage To Freedom program. The dogs reached Little Shelter just after 9am Sunday morning where they were welcomed by Little Shelter Vet-techs and staff.


Little Shelter's Dog Program Manager is personally overseeing the operation to ensure that the dogs reach their destination safely. The dogs are of various breed mixes, range in size from 8 to 25 lbs, and age from 8 months to 9 years old. Many of these dogs are expected to be available for adoption after a brief quarantine period.

Hamilton the sweet 8 year old Pitbull Mix has just had his final surgery! He arrived to Little Shelter with tow damaged Crucriate Ligaments in his hind legs that required surgery for repair. Hamilton is now happily resting after his last surgery to repair his other back leg. He will need a couple of months to recuperate and physical therapy before he will be able to walk with his full weight on his hind legs. You can read more about Hamilton by checking out our youcaring campaign and make a donation towards the cost of his care.
Find out more by clicking here.


Join Us For A Little Shelter Event!

Tickets on sale NOW! Little Shelter's exciting Mercedes-Benz Raffle is back and you have a chance to win $25K or a NEW CLA Mercedes-Benz. ONLY 600 tickets are available and one ticket is guaranteed to win! Tickets are $100 and all proceeds go directly to the dogs and cats of Little Shelter, so you can't loose.


-Mother's Day is right around the corner and a Mercedes-Benz raffle ticket makes a perfect gift to fit in her card to say I Love You!

Little Shelter Animal Rescue is looking to hire a full time vet to work at our shelter. Candidates should be able to perform spays and neuters and other minor surgeries in our surgical room. For more info and if interested please email resume and salary requirements to: tito@littleshelter.com

Thanks To A Microchip, Two Cats Surrendered In Tennessee Found Their Way Back To Little Shelter

Microchips for cats and dogs are becoming more of a standard practice with shelters. Little Shelter being a leader in its community has been microchipping all their adoptable animals for over a decade. If a cat or dog is ever turned into a shelter, Little Shelter is notified that their animal is there and we can go and recover them.

Being located in Huntington, you can imagine how surprised Little Shelter was to get a phone call from a shelter in Tennessee saying they had two of our cats! After being surrendered they were traced back to us thanks to the microchip both cats had. When asked if we would take the cats, Chester and Lucy back, of course Little Shelter said YES!

Arrangements were made for them to fly from Tennessee to New York where Little Shelter Vet-Tech Maryann and Volunteer Andrea would meet the cats at the gate. While it took about two weeks to get everything ready, the cats were soon on their way back.

These two cats arrived late one evening and spent the night relaxing at our volunteer's home before completing their journey to Little Shelter. Just as soon as they were let out of their crates, the two made themselves right at home!
"It was almost impossible for me to bring them back to Little Shelter. In one night we bonded so much, it felt like they were my cats." - Andrea, Little Shelter Volunteer

After a night of cuddles, Chester and Lucy made their way back to Little Shelter Tuesday afternoon where they were warmly greeted by the staff. We are happy to say that both cats are happy and healthy kitties who enjoy getting affection and are eagerly awaiting being adopted.
This just goes to show how important microchipping is, even across state lines a lost animal can be reunited with their family or in this case returned to the rescue group committed to them. As for Chester and Lucy, they are available for adoption and we would love to keep these two together as they have known each other their entire lives.